A few years ago I began to collect the sounds of people walking and reacting to the exposure to artworks through the halls and the rooms of various Museums of modern or contempary Art around the world like MoMA NYC, Tate Modern in London, Philadelphia Museum of Art, MCA and the Art Institute in Chicago, the MoCA in Miami, MoCA in Los Angeles, the MoMA in San Francisco, MUDAM Luxembourg, Hangar Bicocca and Fondazione Prada in Milan and Guggenheim in NYC.

Out of these many visits I’ve encountered two very special moments, both signed by the contemporary presence of a remarkable work of art, the space and its climax.

My visits at the Guggenheim NYC and at the Tate Modern in London have been activated by meeting respectively the work ( and the beautiful interview) of Agnes Martin and the impressive video Memory of a Square of Gulsun Karamustafa.

These became the sonic ambience on which I recorded a musical counterpoint, a sort of dialogue around the displacement of the audio caused by artworks meeting humans.

You can listen and learn more about the idea, the intention and the process on Bandcamp.

That day I was visiting the Serpentine Galleries.
A funny displacement feeling captured my attention thanks to some sounds coming from both sides of the exposition internal entrance.
That was the moment I started to take some field-recordings of the situation.
After visiting the Serpentine Galleries I went to the Tate Modern.
Walking through the e 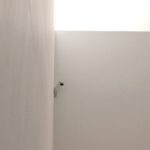 xpositions’ rooms I was caught by another delicate emotional resonance.
Temporal suspension and physical floating were somehow represented by the experience of walking through the artworks.
The peak was reached when I entered the room where the video work by Gülsün Karamustafa “Memory of a Square” was playing.
I had never heard about this Artist before.
Something had happened.
Entering that room I understood what I would have done with the recordings I was collecting. 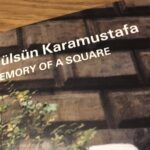 That event lead to many nice discovers and meetings, starting with connecting with a very gentle and passionate Tate Modern curator and a lovely synchronicity with a friend working at the Kassel Documenta, who was so kind to send me Gülsün Karamustafa’s book in the picture, printed by Documenta itself.

I will keep on investigating about the fascinating, delicate and intense feelings originating from the physical spaces of art expositions with a series that I called ArtSplaces.
I like the idea of this being the first step of a walk.

Here is the sound of my walk through Tate Modern, in and out of Gülsün Karamustafa. Suspended.

This event resonated with the feelings of temporal suspension and physical floating, which is the reason why it exists and resists in time in the form of audio material.