Since I began my musical journey I’ve always been fascinated by the depth of acoustics, sound processing and real time audio manipulation, so much that I feel like I am playing sounds much more than guitar.
I’ve been extensively using rack processors since the end of the eighties.
My setup grew to a point where I felt the need to start reducing it, this was its last “hardware-just” incarnation:

Around the end of 2005 I started to substitute looping processors ( two Echoplex Digital Pro from Oberheim) with a pc laptop loaded with Mobius, just a few months later I started investigating the potential of using an audio interface as signal router/splitter/mixer to drop  another piece of hardware, the fantastic Sound Sculpture Switchblade.
This is where the real story began: I started to use a software application as the center of my audio enviromenment, a hybrid between hardware processors: an Eventide Orville ( later a H8000fw) a TC Electronic Fireworx and a Boss VF1, another great processor, often underestimated and plugins running in my laptop. 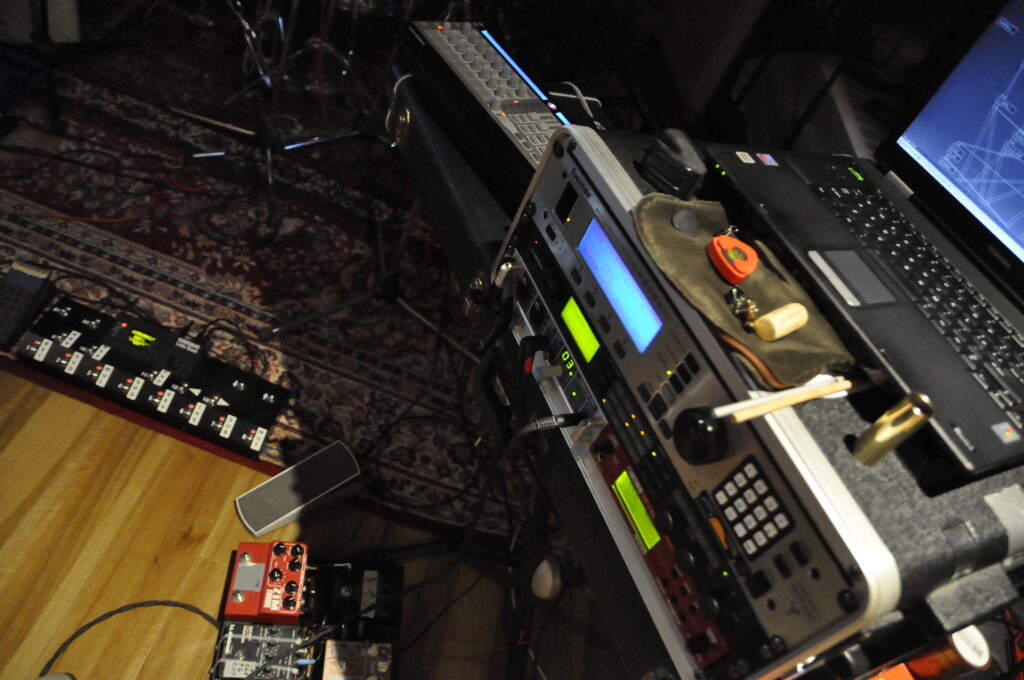 My hardware-software sound processing environment as it was in 2011. Pc laptop running Audiomulch and Mobius as audio looper, Eventide H8000 fw, Tc Electronics Fireworx, Boss Vf-1 and Rme audio card. On the floor the Gordius midi controller and various pedals. Not visible is the Mesa Boogie Studio preamp.

I installed and checked Bidule, Usine, Max-MSP, Live and Audiomulch.
Checking these amazing software meant to enter into their respective universes, meeting completely different approaches to audio routing, user interface, general settings concepts, languages and internal organization.
Being a non digital native with zero academic training in electronics and computer programming I’ve had the feeling of being exposed to a sort of philosophical challenge.

I checked these fascinating applications keeping my focus on audio routing flexibility, midi control, computing resources, system stability and ease of use.
With these aspects in mind I decided to go for Audiomulch which, since then, has been the environment in which I’ve developed my audio processing system and, basically, the core of my playing: my actual musical instrument.

Audiomulch was a fantastically thought application: essential and deep at the same time, clean and efficient, with a very smart way of connecting modules and plugins; it has been key to allow my approach to audio processing progress and grow up to where it is now.

During all this time I’ve met many idiosyncrasies, bugs and incomprehensible solutions that made me waste a big lot of time and challenged my patience.

In 2016, after more than 10 years of use of Audiomulch I feel that there’s no more reason to live within the restrictions of 32 bits and be limited by single core processing; I feel like I have to move to a more up to date application. This is sad as I would prefer so much to keep using Audiomulch, I still think its concept delivers the best mix between interface/routing/processing/midi mapping out there, at least for the way I use it.

Since March 2016 I’m testing software to find the new host to process my audio.
Max/MSP, Usine, Audiostrom Sound Professor, Plogue Bidule, Cantabile, Ableton Live, Bitwig, Gig Performer and some others I just can’t remember.
All this to find the application to replace Audiomulch.
It is complicate, there are so many weirdness out there, strange visions and sometimes incomprehensible solutions. On the other hand you can easily find many interesting ideas but, unfortunately, not all of them in the same package.
I honestly just hope Audiomulch will show a new breeze of life, just before I do the final move.
Please Ross, let the world enjoy Audiomulch at 64 bit and with multicore support!